Will California Senate Bill SB 50 wipe out your neighborhood? Are you in the SB 50 zone?

SB 50 is an unprecedented plan to destroy homes & apartments statewide to build towers up to 8 stories. In all areas that escape the towers, single-family zoning will be banned to make way for 4-plexes. 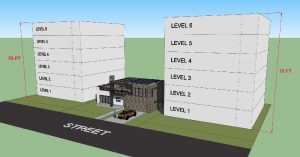 Buildings up to 85 ft. will be allowed on streets near bus stops

Buildings up to 75 ft. will be allowed on streets near rail stops

Buildings as high as 75 ft. would be erected (in “job rich” zones)

Wiener’s reckless experiment on an entire state was put on hold last spring amidst massive opposition from Californians, but SB 50 will come roaring back in Wiener’s new campaign push in October or November of 2019. He wants approval by the California legislature and Gov. Newsom in early 2020.

You Must Act Now

Yes, your neighborhood is targeted. Do you live in an area below?

Which areas are saved from SB 50 and its disastrous “buy-out-and-bulldoze” concept?

Bob Hertzberg, the respected California Senate Majority Leader, opposes SB 50 and calls the plan full of “unintended consequences.” The cities of Los Angeles and San Francisco — Scott Wiener’s own hometown — have taken opposition votes against it, as have scores of other cities, numerous social justice groups and the L.A. County Democratic Party.

Stop Sacramento from Ruining Our Neighborhoods

It’s Back.  The California Senate is reintroducing Senate Bill 50 on Tuesday January 7th.  SB 50 will allow massive apartment buildings in single-family neighborhoods with no setback restrictions or parking requirements. And we will have no local control! Sacramento leadership is pushing our senators to vote yes on SB 50.  We must stop SB 50 now!

SB 50 will have monstrous impacts on all California communities and every Sherman Oaks neighborhood.  Please immediately contact our Senator Bob Hertzberg and tell him to vote NO of SB 50: senator.hertzberg@senate.ca.gov  by email and 818-901-5588 by phone.

Please contact all the Senators listed below. Tell your friends especially those who are constituents of these Senators to voice their objections and insist they vote NO on SB 50.