Think We Have a Homeless Crisis Now ? How About After a 7.0+ on the San Andreas Fault

Earthquakes are inevitable and can happen at any time. Plate tectonics don’t care if we’re going through the worst global pandemic in more than a century.

We were reminded of this morose reality when a 3.7-magnitude quake rattled Los Angeles County awake just after midnight April 22.

Understandably, the immediate reaction online was one of disbelief, frustration, and anger.

It was very on brand for 2020, but it left us with a tough question: What would happen if a big quake hit right now?

A big quake would be devastating for Southern California even on the best of days.

Say we were hit by a 7.8 magnitude temblor from the San Andreas — a scenario laid out in detail in the U.S. Geological Survey’s ShakeOut Report and our podcast The Big One: Your Survival Guide.

We’d be dealing with an earthquake 44 times stronger than the one that hit Northridge in 1994.

Tens of millions of people could be impacted, with shaking lasting for more than a minute for some. There’d be power outages, water main breaks, gas leaks, fires, collapsed buildings, destroyed bridges and roads. 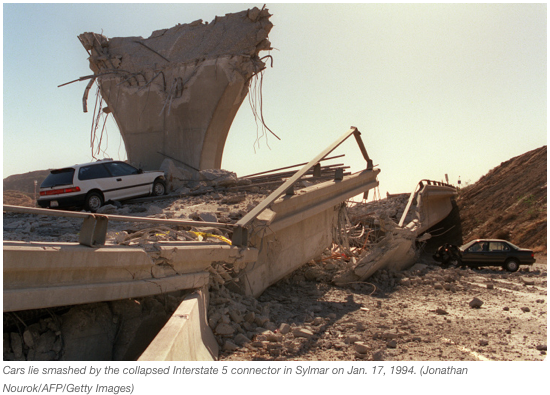 Repeated aftershocks would do further damage.

In the above scenario, experts predict that more than 1,800 people could die, 50,000 could be injured, and hundreds of millions of dollars of damage could be done to infrastructure and the economy.

It’s impossible to game out exactly how everything would go. How the stresses put on our lives and the systems we rely on, by coronavirus, might hamper our response to a big quake that’ll disrupt and destroy so much, on its own.

Surprisingly, it seems like there might be some positives to having everyone quarantined and our country on high alert.

Turns out spending a lot of time at home has its perks.

People are already sheltering in place, which recommended when a big quake hits.

“There would probably be fewer casualties,” said Lucy Jones, seismologist and lead author of The ShakeOut Report. “Whenever we model what goes on in a big earthquake, there are far fewer casualties if it’s at two in the morning instead of two in the afternoon because people aren’t on the roads. They’re in their homes, which tend to be the safest buildings in California.”

You’re much better off if your home’s been retrofitted.

Apartments have their own sets of problems. 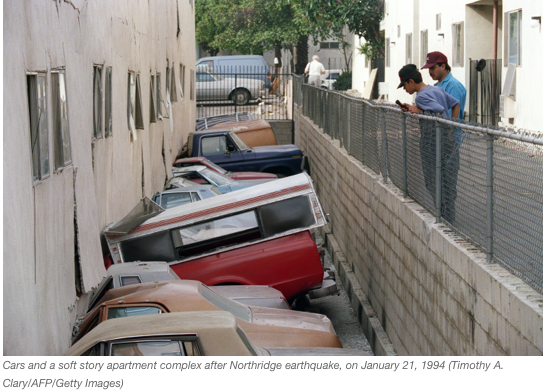 If you’re already hunkered down, you may have many of the supplies you need to survive without power, water, or outside help until it gets established.

There’d be fewer people caught in office buildings and on our roads, which could otherwise be jammed with people trying to return home from work. Parents wouldn’t have to rush to pick up their kids from school.

Clear roads are a boon to emergency services, which would have an easier time getting around to survey the region for damage and to respond to fires and building collapses.

A big part of earthquake response is coordinating emergency services from local, to state, to federal levels and making sure everyone is communicating and allocating resources where they need to be. That’s already happening to some extent because of COVID-19.

“I would think that we could jump on it faster,” said Forrest Lanning, Earthquake Response Liaison for FEMA Region 9.

FEMA has people staffing their Regional Response Coordination Center in Oakland around the clock because of the virus. Lanning said they wouldn’t have to wait for personnel to make their way in like they did on July 4 when the Ridgecrest earthquake hit and some people were out on vacation.

On top of that, they’re already communicating regularly with California’s government, and other federal agenices like Health and Human Services.

The state is also already talking to counties, like L.A., which would need help if a San Andreas quake hit.

“That’s happening everyday for coordination on logistics and resources, mutual aid, to get around the state.”

Alexander has confidence that key agencies like CalTrans will be able to respond quickly to fix broken bridges and roads, saying they haven’t been hobbled by the virus.

Failures by federal and state governments in response to coronavirus may not inspire confidence. Although, we have effectively managed many more acute disasters, like earthquakes and wildfires, than we have widespread pandemics.

President Donald Trump has already made a Major Disaster Declaration in response to the pandemic, making more than 500 million dollars available to California. If an earthquake hit, he’d have a chance to receive more federal money.

THERE ARE BIG QUESTIONS ABOUT LONG TERM RECOVERY

That said, a major part of Southern California’s post-quake recovery hinges on outside help. That may not materialize.

“There are other people out there with resources who are going to pile in and help us in this situation when the earthquake hits – that’s probably not a valid assumption at this point,” said Jones.

“Everybody is so stressed, we’re not going to be seeing a lot more pouring in here.”

Contractors that might otherwise be hired to fix buildings might not be able to procure permits, supplies or enough workers and equipment to tend to projects quickly.

Food might have even more trouble making it from the fields to people’s plates, as supermarkets might be closed for days, if not weeks, to deal with damage and lack of power.

The government and groups like the Red Cross will have to set up ways to distribute supplies to people.

What sort of bandwidth will they have to help?

The likelihood is that we’ll have to rely on our friends and neighbors while outside help slowly trickles in.

“American society wants it to be individual. You can pretend with an earthquake that you can do it individually. The reality is you can’t,” said Jones.

“[The pandemic] just makes it more clear. What’s really true in all disasters, is what matters is how your community works together.”

EMERGENCY SERVICES ARE ON HIGH ALERT

During the pandemic, the L.A. Fire Department is operating normally, regularly corresponding with a fully staffed Emergency Operations Center, according to Captain John Ignatzik.

That’s important because they’re some of the people responsible for fighting the many fires that could pop up, and going into downed buildings to save people.

“We’re already here. We’re monitoring. We would adapt and respond,” he said.

They haven’t had staffing issues yet.

Eight employees tested positive for coronavirus, though they’d only screened 155 as of April 1, according to Chief Ralph Terrazas. There are more than 3,000 firefighters on staff.

That said, even without the virus wreaking havoc, the number of emergency services needed to fight fires and save people, will likely not be enough.

It depends on when the quake hits, but if it’s windy there’s a chance that fires could burn all of the way to the ocean.

“We’re better prepared for the Big One than any big city in America, which is to say, we’re woefully unprepared,” said L.A. Mayor Eric Garcetti when we talked to him for our podcastback in 2018.

SOCIAL DISTANCING WILL STOP FOR MANY

After the quake hits, people will want to help one another.

The likelihood is that if you need rescuing, it’ll be a stranger that helps you, not an emergency responder.

That would mean dropping the six feet distance guidance. And that would no doubt lead to more people being infected with COVID-19. That concern extends to where people go after the quake too.

When people are displaced they might end up camping out in parks, as they did after Northridge, or heading to shelters. That could mean crowding. The Red Cross told the New York Times that they’re separating beds and taking temperatures regularly. Given how easily the virus spreads, that may not be enough.

Ambulance services and hospitals are being inundated with coronavirus patients, which is bad news for anyone that needs medical help after a quake. Even without the virus, that could be a worrying amount of people that could max out the system, especially since it’s unclear which hospitals will be operable after the shaking stops.

The most common injuries are going to be cuts from glass, trauma from falling objects and broken bones from people falling over.

Help yourself and others by preventing yourself from getting injured. Duck, cover and hold on when the shaking starts.

You can go the extra step and secure heavy pieces of furniture, and remove any picture frames with glass that could fall and shatter.

“We spent a lot of time digging little pieces of glass out of the bottoms of people’s feet,” said Dr. Greg Moran, who was at Northridge Hospital when the quake hit in 1994.

Make sure you keep a flashlight and shoes next to your bed so that you can protect yourself, and consider ordering a basic first aid kit.

For more tips about preparing for and surviving a big quake, check out our Big One website and podcast.

THE BIG ONE IS COMING. GET PREPARED

We don’t want to scare you, but the Big One is coming. We don’t know when, but we know it’ll be at least 44 times stronger than Northridge and 11 times stronger than the Ridgcrest quakes last year. To help you get prepared, we’ve compiled a handy reading list

Update, 4/22/20: This story was updated to include infomration about a 3.7-magnitude earthquake that occurred in Los Angeles just after midnight April 22.