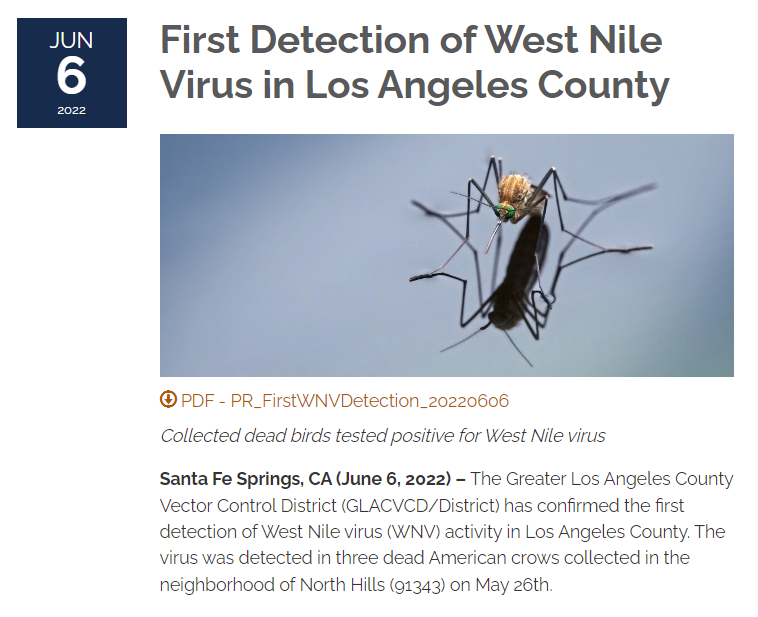 This confirmation serves as the District’s first detection of West Nile virus activity. Mosquito samples have not tested positive for the virus within the surrounding community, nor in Los Angeles County. The dead bird surveillance program serves as an early warning detection tool that helps identify when the virus is actively being transmitted within the bird population. The three dead birds were collected, shipped, and tested at the UC Davis Arbovirus Research and Training Laboratory which provides testing for multiple vector control agencies across the state.

“American crows can fly up to 40 miles each day from overnight roosting sites, so while there has not yet been virus activity detected in mosquito populations in Los Angeles County, this confirmation serves as an alert that mosquitoes may soon become infected and residents should take precautions,” said Director of Scientific-Technical Services Steve Vetrone.

Since West Nile virus is endemic to Los Angeles County, it is typically detected by local public health agencies during summer. Because there is no human vaccine for WNV, residents must be proactive against mosquito bites by wearing insect repellent. The Centers for Disease Control and Prevention recommend products with the active ingredients DEET, Picaridin, IR3535, or oil of lemon eucalyptus as being safe and effective against mosquitoes that can transmit disease when used according to the labels.

One in five persons infected with the virus will exhibit symptoms. Symptoms can include fever, headache, body aches, nausea, or skin rash. These symptoms can last for several days to months. One in 150 people infected with the virus will require hospitalization. Severe symptoms include high fever, muscle weakness, neck stiffness, coma, paralysis, and possibly death. If residents feel they are experiencing symptoms, it is strongly recommended to consult their primary care physician.

Mosquito control is a shared responsibility and residents must take an active role in reducing the threat of WNV in their neighborhoods by taking these additional steps: