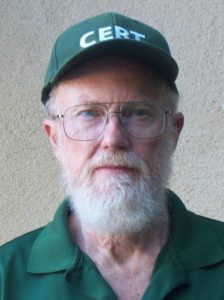 Sharing a tribute to Bill Hopkins, co-founder of the Southern California Preparedness Foundation which holds the Valley Disaster Preparedness Fair. He has been a dear friend to this council and community.

The Bill and Linda Hopkins Scholarship is is a ham radio scholarship program run by the Los Angeles Emcomm Group, funding equipment, classes and license fees for prospective hams under 18 years of age.

From CityWatchLA
GELFAND’S WORLD–Bill Hopkins was a man with a dry sense of humor and a passion for improving the lot of his fellow humans.

He did so by charitable works and through his determined efforts to prepare the people of southern California for a major disaster.Out of this determination came his founding of the Valley Disaster Preparedness Fair. He ran the Fair for the past 12 years, bringing training and information to tens of thousands of people. Those fairs also distributed thousands of emergency kits (what we call “Go Bags”), not to mention printed information and a lot of grilled hamburgers.

Along the way, Bill cofounded the Southern California Preparedness Foundation along with Linda Pruett, Dave Brown, and Ted Snyder. You can read Bill’s weighty resume on the linked page. The SCPF is a nonprofit that has raised approximately $50,000 for each year’s operations including the Fair.

Bill and his SCPF colleagues were contributors to the Los Angeles Neighborhood Council Emergency Preparedness Alliance, and contributed organizational and preparedness ideas that have been developed for the use of all 99 neighborhood councils.

Bill was also active in amateur (“Ham”) radio, particular in local organizations that are dedicated to providing communications in the event of disaster. Ham radio has routinely shown itself to be the last chance method of communications when disasters such as hurricanes and earthquakes cause other communications to fail. Bill held the highest level license, the amateur extra class.

In 2019, Bill sent out an email to his friends and colleagues explaining that he had developed a case of leukemia and that following chemotherapy, he had developed a secondary fungal infection that was proving hard to get rid of. Although the partial course of chemo had put him in remission, the infection was proving nearly impossible to get rid of and might be the end of him. Although the message was unhappy, to say the least, those who saw it couldn’t fail to be impressed by the stoicism and wry humor it displayed.

Bill succumbed on June 21, 2020. Just prior to his passing, Bill was feted by a large crowd of people who showed up in front of his house to pay him tribute and to present him with honors.

Linda Pruett, one of the directors of the SCPF, described him: “Bill was a very private person.  He was widowed, and had no children.  Not many people knew, but he was extremely philanthropic.  Bill will be missed by many, and Disaster Preparedness has lost a true hero!”

Dave Brown spoke as follows: “He’s one of the most tenacious people I’ve ever met.” Dave went on to describe how Bill did everything from creating and running the annual Disaster Preparedness Fair to turning a bicycle into a mobile amateur radio platform, one which he could ride to the top of the local mountainside in order to maintain radio communications in times of need.

All in all, an interesting fellow with a record of serious accomplishments in disaster preparedness. His passing is a loss to the entire community.