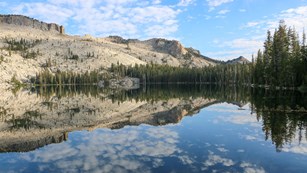 Some of the happiest times in my childhood, certainly some of the best memories I still have are based on our family’s annual summer vacations. We did our best to visit to almost every National Park in our beautiful country. We need to keep this tradition going until we achieve our goal, even though our parents have become grandparents and great grandparents now. These trips instilled an irrevocable love for our country. It’s part of the reason that if it were up to me, we’d make “America the Beautiful” our new but still very traditional, National Anthem.

“Oh beautiful for spacious skies for amber waves of grain,
For purple mountains majesty, above the fruited plains.”

Back in the day we’d sing that and many other traditional songs, folks songs, school songs, hymns, and even popular songs of the day… as we drove across the country each year. Clear skies, clean air, pristine nature – don’t we have a right to these treasures?

As national treasures they must be protected. As public treasures they belong to each and every one of us all rich beyond measure and so we’re all responsible for their care and maintenance – in perpetuity – as President Theodore Roosevelt wanted. He wanted to protect our wildlife. His was the “Bull Moose” Party and the iconic children’s toy the “Teddy Bear” was named for a man with the vision and tenacity to create the National Park System.

To our stakeholders and others visiting this site, you might remember when family trips were made possible by Henry Ford’s “new” assembly line technology creating cars that every family in America could afford. You might remember how affordable the fuel to run them was. I recall my father’s outcry when the price per gallon doubled from 25 to 50 cents per gallon! As a child I didn’t understand but my father was from a time when “Nickelodeon” referred to the fact that the price of a movie ticket was only a nickel and gasoline was just about the same per gallon. This made America’s highways and byways accessible to nearly everyone. You might hold dear to the dream that your grandchildren and theirs, might one day have the same opportunity, perhaps with vehicles that run on clean-burning Hydrogen fuel cells (‘Water Engines’) or an even more fanciful future in which huge touring airships transport whole families across the country, above the ground, for an even better view.

Future generations deserve the opportunity to live and breathe in a world of endless possibilities with an unhindered view of the majesty of nature. Clean fuels make clear air possible and environmental protections are essential so that we can keep our public lands unspoiled.

I for one, applaud the efforts of Scenic America keeping our highways and byways accessible, uncluttered, and our view of the countryside unlimited. I’d like to leave behind a legacy for our grandchildren and great-grandchildren so that they might make their own happiest childhood memories with shared family experiences from far and wide across our country, which you have to see and experience first hand, to truly understand that this is what makes America our great and beloved home.

This is just my personal expression. I cannot speak on behalf of the entire Neighborhood Council or on behalf of the thousands of people who might read this. I’m appealing to you as one individual to others. If you feel as I do, that our “Scenic America” is worth preserving, I encourage you to write letters of your own and make calls to your elected officials speaking on your own behalf.

Their contact information can be found on this website. Please go to the “Community Resources” tab and scroll all the way down to find “Elected Officials” each of which will redirect you to their website with its own Public comments section.

Scenic America reports that on July 1 H.R. 2, the Moving Forward Act, passed the House by a vote of 233-188 – a moment that marked a huge victory for Scenic America and all those who care about our nation’s scenic resources.

It’s hard to overstate the importance of the Moving Forward Act when it comes to our country’s scenic beauty. This bill includes funding for more than $1.5 trillion in infrastructure projects, including roads, bridges, schools, housing, and transit systems, over the next five years.

Over the month of June, Scenic America and our supporters all worked tirelessly during the bill’s review and amendment period to ensure that scenic priorities were included – and bad billboard amendments were defeated.

Federal bills like this often run to over 2,000 pages, and the process of adding amendments to them is usually long and complex.

During a House Session on June 18, members of both parties shared personal stories of cherished byways and scenic areas in their home districts. Click to see a statement by Rep. Sean Patrick Maloney (D-NY), Highways and Transit Subcommittee Ranking Member Rodney Davis (R-IL), and several other supporters, about the importance of the program.

Undergrounding also made enormous progress under this bill as well, through the $25 billion per year National Highway Performance Program.

Scenic America was able to get the following language in the bill as an acceptable use of the funds: “Undergrounding public utilities in the course of other infrastructure improvements eligible under this section to mitigate the cost of recurring damages from extreme weather events, wildfire or other natural disasters.”

In addition, a Dig Once Task Force was created to encourage undergrounding of broadband, and Scenic America advocated for the placement of “one representative from a public interest organization” to that Task Force.

A last-minute dramatic turn was the end-of-day, right-before-the-weekend introduction of Amendment 316, which would have changed the current safety requirements in the Highway Beautification Act. The change would allow a billboard to be anywhere “within 200 feet of a highway” including in the highway median or 2 feet off the highway.

This proposed amendment was a direct attack by the billboard industry on the legacy of Lady Bird Johnson’s Highway Beautification Act, but Scenic America and our supporters mobilized right away and was able to defeat the amendment. The House Rules Committee rejected it definitively, which means that we beat the billboard industry in a straight-up legislative fist fight in Congress.