Budget Day is Saturday June 29th:  Come Have a Say in How Your Tax Dollars are Spent

Join the Neighborhood Council Budget Advocates at City Hall on Saturday, June 29th for their annual Budget Day event! Everyone is welcome to attend who is interested in learning more about how the City of LA spends its money – and how to create influence regarding spending decisions in Los Angeles.

Free with RSVP, and breakfast (and free parking if you need it) are both included with your registration! Sign up now at http://bit.ly/BudgetDay2019 Breakfast and registration begin at 7:30 AM in the 3rd floor rotunda of City Hall in Downtown LA. After breakfast, everyone moves to the City Council Chambers to learn about the City’s plans, process, and timeline for the Fiscal Year 2019-20 budget. Following that general session, you’ll be invited to join smaller working groups for breakout sessions. Here, you’ll sit down with Budget Advocates and other folks representing your area of the City, to discuss your greatest concerns about issues that your neighborhood faces, and share suggestions for improving the quality of life in your community. In these breakout sessions, you’ll also learn tips for how you and your community can use the City’s Budget process to better influence the financial decisions made by your elected officials. Your comments and priorities will be documented by the Budget Advocates, and incorporated into their City Budget evaluation process for the coming fiscal year.

After the breakout sessions, elections to fill vacancies on the Budget Advocates Committee will be held. (Elections are open to those who have been formally appointed as a Budget Representative for their Neighborhood Council.) SCHEDULE The event schedule is as follows – you are welcome to join for as much or as little as you have time for: 7:30-8:30 AM: registration and breakfast (3rd floor rotunda) 8:30-10 AM: general session in City Council Chambers (3rd floor) 10 AM-12 noon: regional breakout sessions 12 noon-1:30 PM: special followup session for newly elected/continuing Budget Advocates, including Executive Committee elections and first kickoff meeting QUESTIONS? Want to learn more about this event or what the Budget Advocates do? Email their Executive Committee at LABudgetAdvocates@gmail.com ABOUT THE BUDGET ADVOCATES The Neighborhood Council Budget Advocates ensure that the needs and priorities of Los Angeles’ diverse communities are taken into account in the City’s annual budget. They are a Citywide alliance that draw their membership from LA’s network of 99 Neighborhood Councils. Budget Advocates are elected to represent their region of the City by the Budget Representatives who are appointed by each Neighborhood Council. Besides meeting monthly, the Budget Advocates produce an annual White Paper with their recommendations for LA’s budget for the coming fiscal year, which is presented to the Mayor. They also host Budget Day every year at City Hall, to give every Angeleno the opportunity to be part of the financial decision making process in the City of Los Angeles. Learn more about their work and read this year’s White Paper on their website:   http://ncbala.com 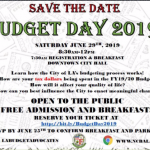 The Budget Advocates are an elected body under Neighborhood Council system which represents the interests of stakeholders across Los Angeles with a focus on City services and how well they are funded.

Since the city has finite financial resources not all needs can be met and, prior to the establishment of the Budget Advocates under the City Charter, the beneficiaries tended to be special interest groups who had the ear of the City Council.

The city is broken into departments to provide services and each department creates a budget each year covering its projected costs based on parameters set by the mayor.  This is then assembled into the full City budget – now almost $10 billion – for the upcoming year.

Budget Day is an opportunity for any interested resident to learn more about how the City operates and to give input on their concerns.

Because people at City Hall do not always see the repercussions at the local level, the only way to get change is to speak up.

Come and join us.