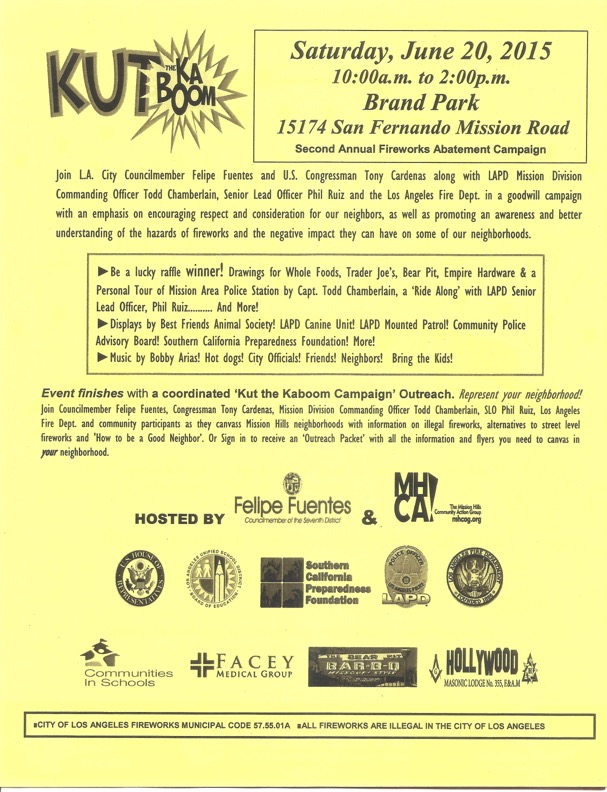 Local elected, police and fire officials are sponsoring a rally on June 20, 2015, to remind the public that ALL fireworks are illegal in the City of Los Angeles.

“Fireworks pose a danger every year to neighborhoods in the forms of fire, injury, even death,” said Capt. Todd Chamberlain, commanding officer of the Mission Police Station, which is one of the main organizers for the rally.  “Fireworks complaints also divert police and fire resources, needlessly tying up cops and firefighters and delaying responses to other serious emergencies.  And in this time of drought and high temps, wildfires are a real concern.”

The rally will be held at Brand Park in Mission Hills.  It starts at 10 AM with raffles, music and food.  Local businesses have donated gifts and prizes to encourage participation.  Police and fire equipment will also be displayed.

The event will culminate with a local canvassing of neighborhoods, reminding residents that all fireworks are illegal in the City of Los Angeles, and to encourage other forms of patriotism and entertainment on the 4th of July.

Los Angeles City Councilmember Felipe Fuentes and Congressman Tony Cardenas, who represent the area in city council and the US Congress, will be at the rally.

10:30 a.m. – Orientation: Pamela/Betty/Tania: Following Speakers, Stakeholders will receive information on the ‘day of Event’ community canvassing process and given outreach package and assigned to canvass with various LAFD, LAPD & participating VIPs. Note: Stakeholders not participating in ‘day of Event’ canvassing process will be requested to sign up for an outreach package and given instructions on outreach in their respective neighborhoods. All participants will be given information on how to participate in the ‘After’ July 4th Survey.
12:00/12:30 p.m. – Stakeholders begin returning from canvassing.
Raffle tickets handed out. Betty Ley
12:45 p.m. – Ceremony recognizing San Jose School student participating in Kids Kut the Kaboom contest. Councilman Fuentes & Chief Combs.
1:00 p.m. – Raffle will take place following Kids Kut the Kaboom Ceremony.  Raffle – Councilman Fuentes, Bobby Arias, Pamela Goldfinger, Betty Ley
Hotdogs, chips offered during Raffle.
1:30 p.m. – End of event closing remarks: Congressman Cardenas (?) & Councilmember Fuentes
NOTE: Congressman Tony Cardenas will be a late arrival. Depending on arrival time, his attendance will be announced and every consideration given for the Congressman to speak. End of event closing remarks may be the best opportunity.